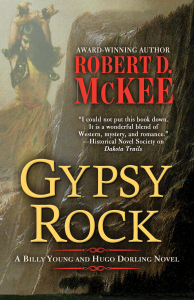 WINNER OF THE Will ROGERS BRONZE MEDALLION AWARD FOR 2019

Gypsy Rock  is the  second in the Billy Young and Hugo Dorling series. The first was Killing Blood. The third, Reckoning at Lost Hope, was recently accepted for publication, and will be released in 2020.

Wyoming is booming.  It has vast prairies for grazing and precious metals both above and below the ground. It also has a greedy few who will do whatever they must to acquire these riches for themselves. What they will not do is allow Billy Young and Deputy Hugo Dorling to stand in their way. Gypsy Rock  is the story of one evil act that sets off a chain of events that spirals downward toward dozens of brutal deaths. It is a story of hate and prejudice, acceptance, and courage. Ultimately, Gypsy Rock is the story of Billy Young, a twenty-year-old Wyoming rancher and his effort to find his place in what appears to be a dark, treacherous, and violent world.

What others say about Gypsy Rock:

"In 1892, a small group of Gypsies settles near the central Wyoming town of Casper. Deputy U.S. Marshal Hugo Dorling and his sidekick, young rancher Billy Young, are investigating the murder of an elderly Gypsy woman who is shot on her way from Casper to Gypsy Rock, where the community is camped. The two men capture Ben O’Dell, identified by a local woman as the killer. After a trial where the witness fails to appear, O’Dell is released. The citizens of Casper meet and decide to attack the Gypsy camp, to try and force them to move on. The [Gypsy] leaders resolve to hold their ground and defend themselves.

In this western with a twist, McKee writes about a group other than African Americans or Native Americans about whom prejudice continues to exist in the 19th century. Tension builds throughout the story between the people of Casper and the Gypsies, until the final chapters when the townspeople must choose between the marshal’s investigation of the murder and following those who wish to destroy the camp. The steady unraveling of the plot is genuinely exciting."

---Roundup Magazine:
"Wyoming in 1892 may be booming, but the rules are set by those with the money. Some say that period, give or take a decade, determined the economic and social structure of Wyoming for the next hundred years. Robert D. McKee's story captures the era with witty dialogue and charm."